Remedies Needed for the Shrinking Space for Civil Society 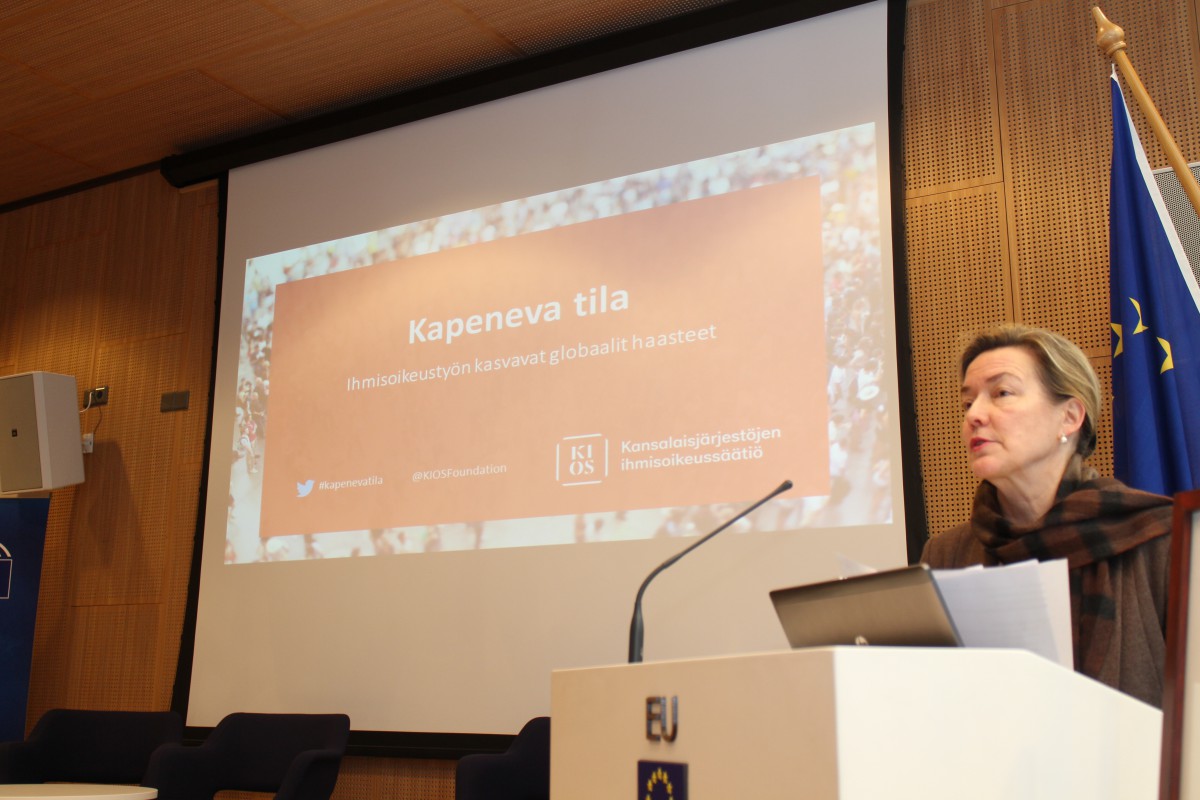 The former president of Finland, Tarja Halonen, emphasized the importance of civil society in the launch event of the KIOS seminar report. The event brought together Finnish experts of human rights and development, to reflect on ways to stop the space for civil society from shrinking further.

The report, Perspectives on the Shrinking Space for Civil Society and Human Rights Defenders, published on Tuesday, is founded on the material from the international human rights defenders seminar, arranged by KIOS in September 2015. The seminar brought together human rights defenders from Africa, Asia and Europe as well.

The theme of shrinking space for human rights defenders rose as a central topic in the discussions of the seminar. Particularly, the General Secretary of World Organization against Torture, Gerald Staberock spoke on the topic.

According to Staberock, we now see a counter reaction that partly rises from the successes of the international human rights movement. Human rights defender are actors of change. Many states are nervous about that change and they react to it.

Former President of Finland, Tarja Halonen spoke at the report launch event – and emphasized the role of civil society.

“The work of civil society and NGOs will have even greater importance in future. An active civil society takes forward the kind of development, where countries and their own citizens take responsibility on the future of their societies.”

“This supports the problem solving abilities of societies, so that stable and peaceful development can be secured, or after conflict, a return to peaceful development is possible. It is concerning that in many countries the space for civil society and free speech is being limited right now, President Halonen stated.

Under-secretary of State Elina Kalkku from the Ministry for Foreign Affairs of Finland also spoke on the ways Finland is supporting the space for civil society and human rights defenders.

“The recent trends regarding civil society are not good. According to Civicus, 96 countries faced clear threats against freedom of speech in 2014. However, at the Foreign Ministry of Finland, free civil society is regarded as one of the pillars of development.”

On the report, published on Tuesday, General Secretary of World Organization against Torture, Gerald Staberock, gives insight on the ways states have limited the human rights work of civil society around the world.

NGOs in developing countries are often dependent on international funding. In many countries, governments have implemented laws which make receiving international funding forbidden. Laws of this kind have been seen, for example in Ethiopia and Russia, from where they have spread also to few others.

Many states utilize also laws created to fight terrorism in limiting the freedom of human rights defenders. Staberock notes that states often get international support in drafting counter-terrorism legislation, but when these laws are misused, the international community often stays silent.

In addition to states, threats to human rights defenders are often coming also from multinational corporations, private security services and extremist groups. New kind of dialogue on human rights and the private sector actors are much needed in many parts of the world.

Finally, Staberock states that these developments are possible because international commitment on human rights is in danger to fade. For example, many European countries have reduced their support for development cooperation, now that the civil society would need it urgently.

The executive director of KIOS, Ulla Anttila, emphasized that the shrinking space for civil society needs to be addressed in international forums.

In the launch event, KIOS also shared information of a coming campaign, connected to the current crisis in Burundi. KIOS has for years supported human rights work in the country. During 2015, the human rights situation worsened quickly, after the President Nkurunziza continued for a third term – an act which is regarded to be against the country’s constitution. The crisis is in danger to escalate into a civil war.

At the same time, the state funding of KIOS has been cut with 41% in the beginning of 2016, which drastically hinders KIOS’ ability to support human rigths work. Therefore, KIOS is starting a crowd-funding campaign for Burundian human rights defenders starting 14th March, 2016.

The Burundian human rights defenders will be supported via East and Horn of Africa Human Rights Defenders Project (EHAHRDP) -network. KIOS hopes for support to the campaign from all its friends.

In connection of the KIOS report, published on Tuesday, the work of KIOS was supported by Vihreä lanka -magazine and Members of the European Parliament Heidi Hautala, Liisa Jaakonsaari, Sirpa Pietikäinen and Petri Sarvamaa. Warm thanks for your support!